Saint Laurent’s Anthony Vaccarello is clearly a romantic for postcard urban landscapes. For Fall/Winter 2018, the designer set his fourth runway show for legacy French house Saint Laurent against an Eiffel Tower backdrop. This season, Vaccarello ditched the Parisian streets for New York City. He hosted an impressive, ultra-modernized pseudo-version of a party event Yves Saint Laurent hosted to fete the launch of his Opium fragrance forty years ago. Dieses Jahr, to present his Spring 2019 men’s collection across the Hudson in New Jersey’s Liberty State Park. Over thousands of square feet of shiny black gridded marble trussed 14 feet in the air.

Towered atop a massive scaffolding that emitted a slow streamline of thick fog, a glossy black marble runway that nearly blended into the Hudson’s murky waters sat between rows of bleacher seats and a breathtaking view of downtown Manhattan.

For his first fully realized men’s collection at Saint Laurent, Anthony Vaccarello leaned all the way into Western references. Vaccarello said he wanted to represent “the idea of New York, the idea of the icons of New York in the ’70s.” It was the dive-ier Max’s Kansas City that sprung to his mind—full of the sort of dirty glamour that has proven itself an immortal style, in Spring’s case with distressed denim hoodies, patchworked boots, and show-stealing high-waisted, boot-cut trousers with just a slightly amplified flare at the kick. The accessories were also noteworthy and novel, and included boat hats and tossed-on and tangled necklaces. Indulgent and wild, but with just the right amount of polish.

Each model came out artfully bathed in disco-ball silver body paint. Body glitter is usually associated nowadays with music festivals, but in the moment tonight, no such thought occurred. This was a “different interpretation of evening couture, for men, without having volume,” said Vaccarello, and indeed, the treatment lent a shine of ultra-glam masculinity that felt very on brand and also somehow . . . right. As in: sexy and now and liberated, but literally painted across the tenets of a fortified, fabulous legacy.

Spring/Summer 2019 was a unique season for the house; despite being Vaccarello’s debut New York show, the collection marked the designer’s first proper menswear collection since taking the reigns from the label’s predecessor, Hedi Slimane, two years ago. 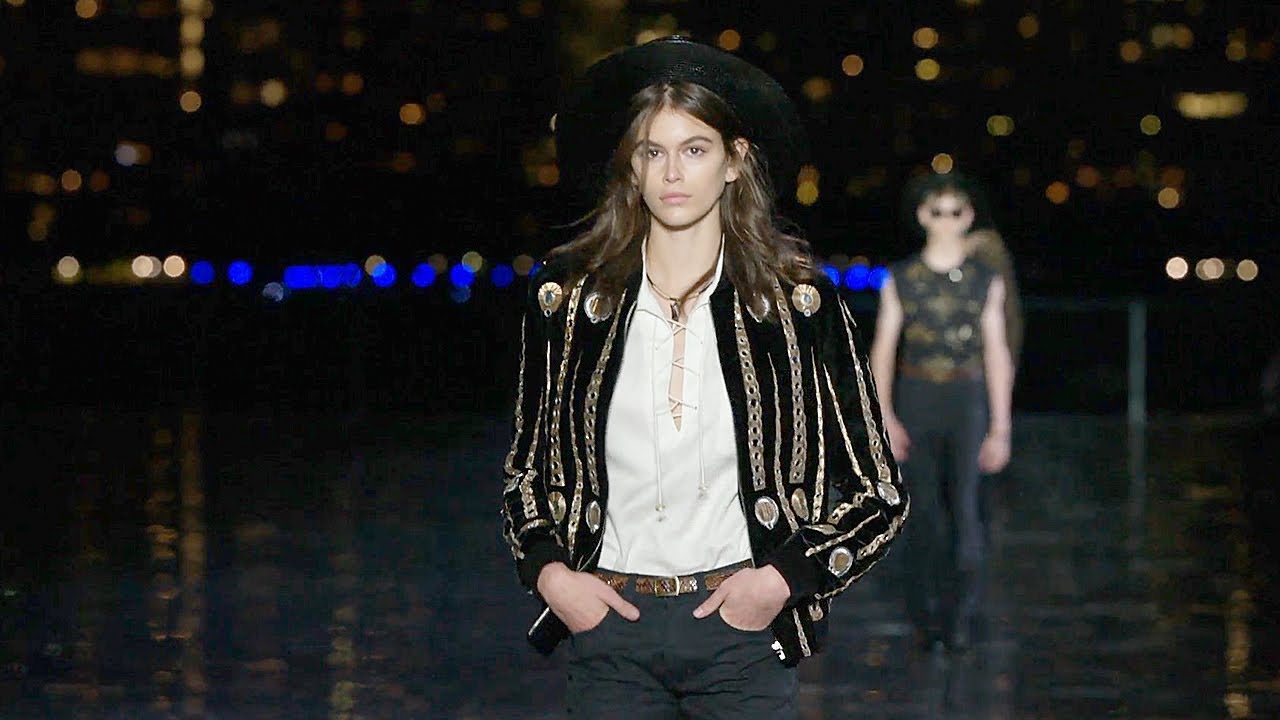 This season, Vaccarello ditched the Parisian streets for New York City. He hosted an impressive, ultra-modernized pseudo-version of a party event Yves Saint Laurent hosted to fete the launch of his Opium fragrance forty years ago.