Milan Men’s Fashion Week also known as Milano Moda Uomo, is the international event that no man with class can miss, presented by the most important fashion houses of Italian fashion; The Fall/Winter 2018/2019 collection event, moved the male fashion caravan to the Milano Moda Uomo fashion shows. The calendar included 13 events, und 7 presentations. The dense calendar of the event was a demonstration of the enormous interest of the men of the sector, welcoming 1.000 Italian and foreign journalists and around 10.000 buyers.

The Milan Men’s Fashion Week, Fall/Winter 2018-2019 Sammlung, kicked off the past Friday the 12th, with the participation from the most important local houses to international newcomers, starting with the premiere of Zegna, continuing with Diesel Black Gold and the Emporio Armani It offered fashion enthusiasts, members of the press, buyers and industry professionals the ideal opportunity to enter a world of glamor for men. jedoch, the absence of some old bastions of the category such as Gucci or Bottega Veneta, like the controversial Philipp Plein did not go unnoticed. Sogar so, the calendar had many attractions, thanks in large part to the fact that Italy’s most historic and famous brands continue to produce discreet male collections.

Even Donatella Versace looks at the style of the street that now seems essential for all the big names. On the one hand, yellow and red plaid brocades with a certain punk influence on the boots full of tacks, but also with a British look in more formal blue-tone suits. The models advance with fluted and studded amphibious boots, with a mix of tartan fabrics. The proposal included leopard print, high boots and golden ocher details. Among the prints, highlights the tiger of 96, to avoid thinking about a Gucci plagiarism that chose this animal as theme.

Innovating as always, Versace dazzled us including 11 feminine looks within the Milan Men’s fashion show. In the new trend to the concept ‘unisex’ unifying the man / woman parades due to the large number of collections that had to be created and produced.

Prada, could not stop attending, one of the most anticipated parades of the women’s season and the same happens with his collections of men, also became present at the gala. Likewise, the Italian house Dolce & Gabbana gave a ‘monarchical’ show at the Fashion Week in Milan, where dozens of ‘millennials’, social media stars and young celebrities, paraded to display their latest collection.

The creative couple did not disappoint their followers with this collection called “King’s Angels”, with the launch of a sign that is added to their creative letters, between crystal chandeliers and stucco, under the banner of a crown, they presented a royal collection marked by the regime’s old attire, embroidered with sequins and gold threads.

The Argentine Paulo Dybala, Juventus forward player, walked with ease the catwalk, being protagonist of the night, parading as the main model of the Dolce & Gabanna brand and was in the main photo next to Domenico Dolce and Stefano Gabbana.

Many events animated the vibrant atmosphere of the Milan Fashion Week, among which the presence of the singer Maluma, who dressed for the occasion a suit of jacket and trousers of the brand with silver sequins and on the lapel of the jacket the embroidered crown that symbolizes the collection. He made history by appearing on a catwalk as distinguished worldwide and singing reggaeton, something that had not been seen before in these parades. Dressed in classic garments and embroidered with flowers, they paraded one by one to close with a flourish with the Colombian Singer

Milan Men’s Fashion Week Fall Winter 2017 2018, culminated on the 15th with Fendi, their models wore long fur coats, layered jackets, retro suits and several bags at once. For his part, Giorgio Armani stood out with the classic jackets, debuting something new: shoulder gown on the Armani catwalk. Some jackets with double breasts and sharp suits, and the end, a series of velvet suits. Also, with soft knit jackets and pants that looked like a hybrid of military pants and a jodhpur. While Armani’s designs are sometimes out of step with the rest of fashion, his aesthetics will always have admirers. 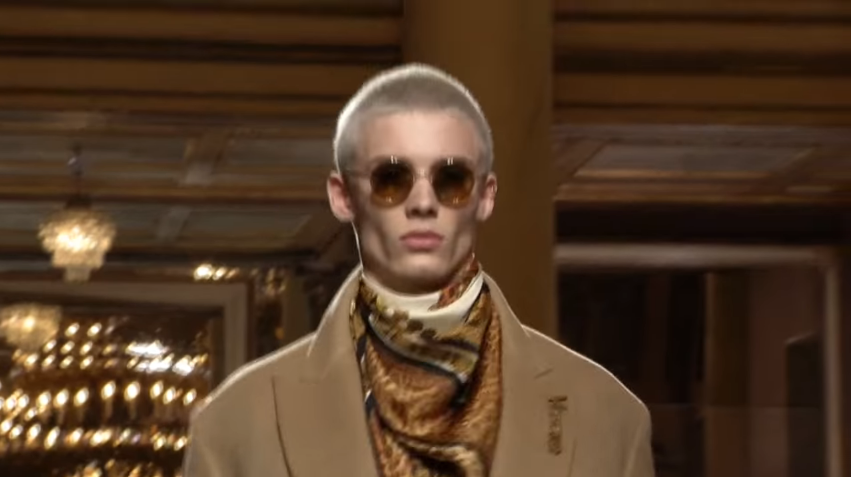 Milan Men's Fashion Week, the international event that no man with class can miss, presented by the most important fashion houses of Italian fashion