The designer Clare Wraight Keller, debuted as creative director of the French house Givenchy, with a varied first collection with luxurious designs at night for the Frühling – Sommer 2018 fashion show.

The designer has presented her first collection full of night designs. Although the color black dyed many of the clothes of the night, the color slipped in the manner of brushstrokes and prints, combining with details of feathers, rich embroidery and silhouettes with the pants as protagonist.

A night of double celebration for Clare Waight Keller, for her premiere at the head of Givenchy’s creative direction, and for becoming the first woman in the history of the firm to hold such a position. After her departure from Chloé, the designer leaves behind romanticism and ethereal silhouettes to holster her models in straight, military cuts with marked shoulders and narrow waists. Americans dresses, asymmetric mini skirts, transparencies blouses and chiffon dresses have been proposed almost exclusively in black and white, with some incursion of red. Keller seems to leave behind the style that won her so much applause in her old position and embark on a new aesthetic path more in the line of the firm whose direction now leads, a darker, sexy way and the passage of some cowboy boots.

The designer, dressed in a black top and pleated skirt, said she wanted the new collection “to return a little to my roots and explore my identity back then.”

The parade was full of interesting pieces, although there was not that moment of necessary emotion that made the hardest members of the audience get up from their seats and silence the music with their applause.

The idea of ​​Givenchy was this new version more simple and homemade, that filled the closet of intelligent garments, rather than make great statements of style. As an example of this, a dress with a side insertion of a thousand folds to facilitate movement. The clothes were practical, even those pants and coats in shiny and pointy fabrics.

Although they were shown separately, most were clothing to wear as a couple, which seemed to proclaim that those who dress together, remain united. In fact, some of the men’s garments were very appealing to women, such as silk shirts, tailored tuxedos and bómbers, even a white sleeveless biker jacket. The manner in which the parade was organized, in watertight blocks of garments for each sex, suggested in truth a joint planning of the couple’s closet.

This idea of ​​showing 17 looks of women, then 18 of men, and then a handful of looks more of both sexes was quite groundbreaking. The passes of the beginning, with a tailored coat of polished lines, followed by a floral dress in black and white and other sets of top with different bottom garments bet directly on modernity.

“I wanted to explore the vision of Monsieur de Givenchy. We met at the beginning of this week, we sat down and talked,”said the new designer. “He is still very interested in fashion and its current evolution. But I wanted to sit with him and tell me what his starting points were, colors, Die Designer verwendeten alternative Materialien wie Plastisol, what he likes. It was a fascinating conversation, because a lot of what I’ve been finding and feeling in his work are things that still fascinate him. “

jedoch, it has not been more than the first demonstration of Waight Keller in Givenchy. Let’s see what the future brings. 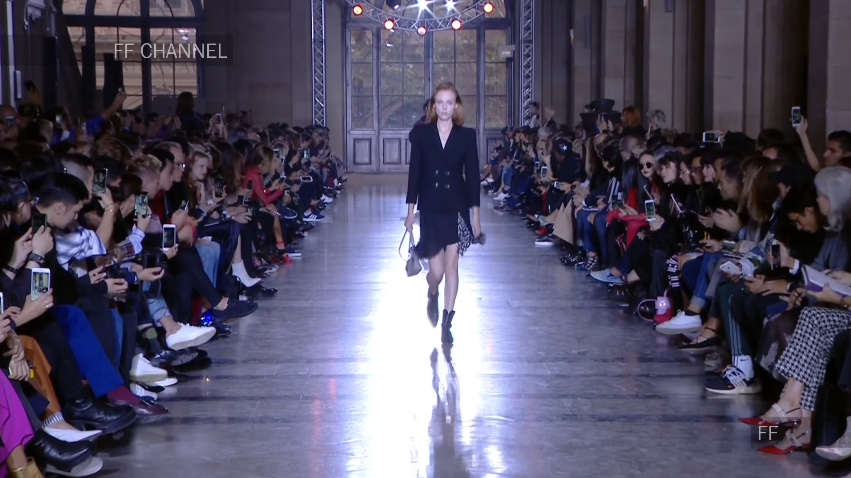 The designer Clare Wraight Keller, debuted as creative director of the French house Givenchy, with a varied first collection with luxurious designs at night for the Spring - Sommer 2018 fashion show.