Donatella Versace sat with the director of Instagram fashion associations, Eva Chen, on Saks Fifth Avenue, to relive the now iconic moment that “broke Instagram” when Donatella reunited the supermodels of the 90s, Carla Bruni, Claudia Schiffer, Naomi Campbell, Cindy Crawford and Helena Christensen, on the runway of Spring Summer 2018 of Versace.

Lets recall that during Milan Fashion Week for the spring-summer 2018 parade of the firm Versace, Donatella decided to gather five great tops that were the muses of Gianni in its most glorious stage. Claudia, Cindy, Naomi, Carla and Helena went back to the catwalks to honor the designer Gianni Versace on the twentieth anniversary of his death. Two decades in which the fashion house that he created in 1978 has experienced high and sad moments after Gianni Versace was killed by Andrew Cunanan on July 15, 1997. 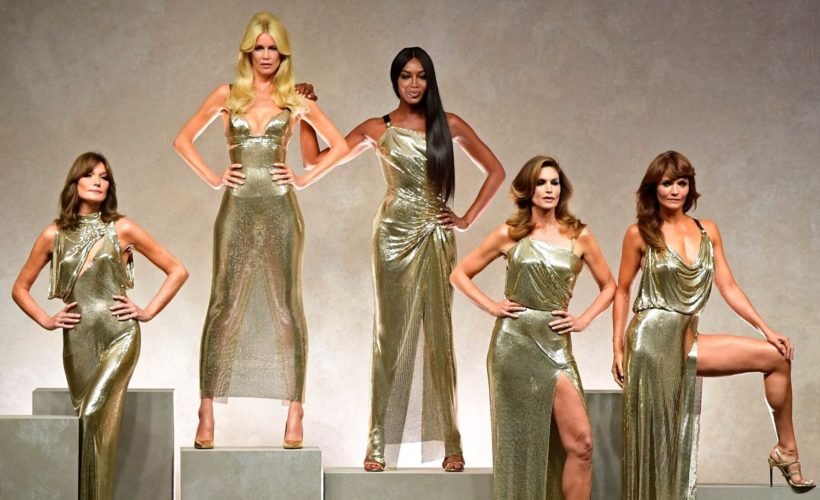 The parade also featured the most media models of the moment: Bella and Gigi Hadid, Kendall Jenner and Kaia Gerber. Past and future of the fashion industry reminded the designer, with a version of his most iconic garments. 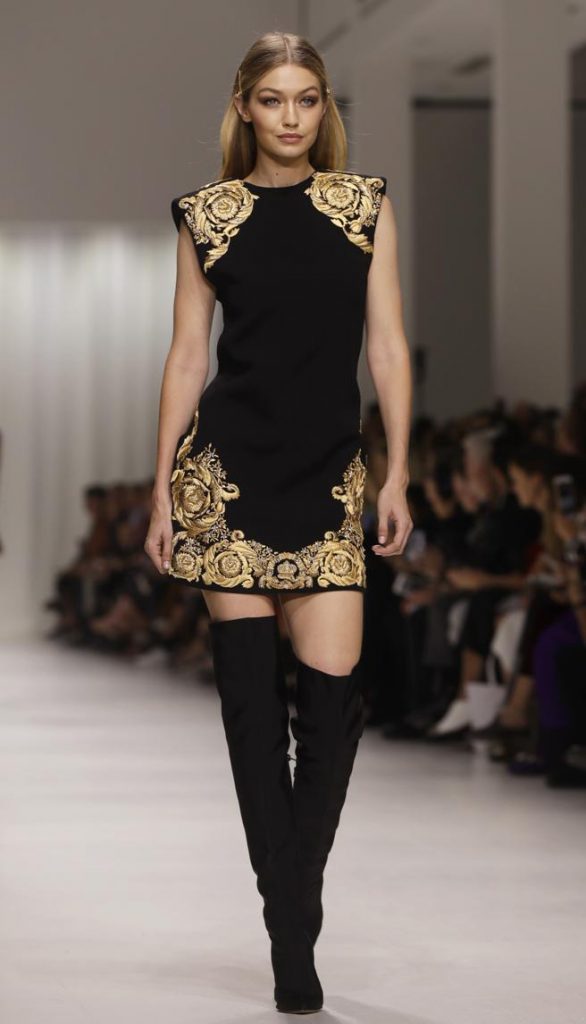 After the lights went out, there was still a surprise to be discovered behind the curtain. The five tops of the 90s appeared dressed as Greek goddesses in gold dresses dazzling the public, while the song ‘Freedom’ by George Michael played, the same theme that Gianni used to present his fall-winter collection 91, and later, Donatella Versace entered, who moved excitedly the catwalk with her muses. 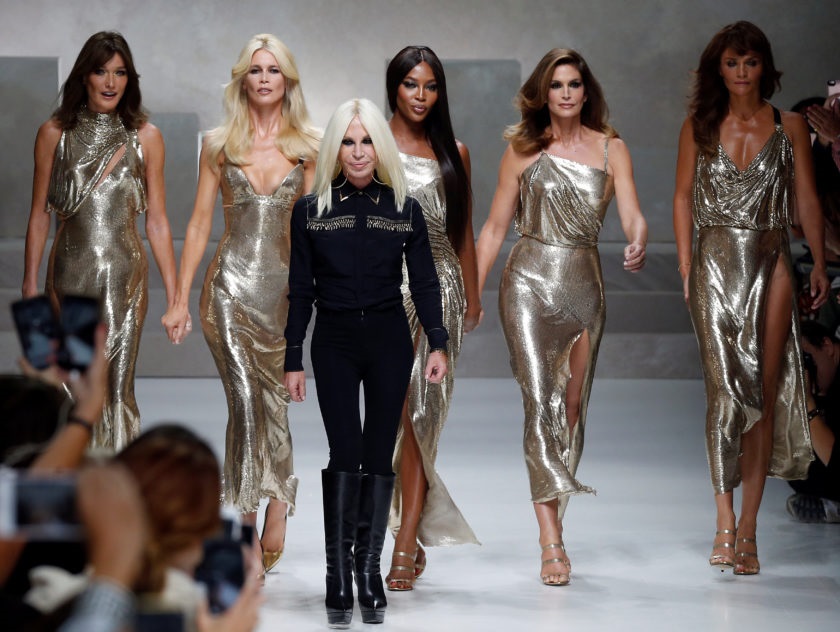 Many others also paid tribute on the anniversary of his death, along with the hashtag #GianniTribute, wich broke all the audience records, and is remembered as the moment that “broke Instagram”. Even two decades after his disappearance, many people remember him as one of the greats, such as the Peruvian photographer Mario Testino, the model Susan Holmes McKagan, the designer Valentino and the actress Penelope Cruz.

One of the first to express the pain she feels since his loss was his sister Donatella, who has shared many photos of her dear brother.

When Eva asked her about the idea of paying Gianni Tribute, Donatella responded with these beautiful words to describe her brother’s legacy: “It have been difficult for me, because is emotional of course” she said “In the 90’s what Gianni did was extraordinary brave, it was breaking barriers, it was making new rules, it was daring, it had a lot of courage. All that kind of personality we all should be able to fight for.” “Gianni fought for it”… “Was risky, was different, was about empowering women… so I thought that kind of thinking empowering women is very today, very appropriate to do the show”

In this interview with Eva Chen, Donatella tells us about her dog, the new generations of models and her new love for Instagram, “The thing I like about Instagram is that it’s given me the possibility to really show who I am. Many people think of me as this cold person or not accessible. I’m very accessible. I like to have a good time.”

Saks has supported Versace since the beginning in 1986, when Gianni made his debut on the US catwalk in a Studio 54. And the affection is mutual. When Donatella visited New York as a young university student, Saks was the first store she went to, with her brother’s credit card in hand.
“For me, personally Saks is New York. I was a young girl, universitary, I remember my first trip in New York and the first store I went was Saks. Saks is iconic, so is versace so I think is a perfect combination” She said “I bought a lot. I used my brother’s money. He was like, ‘What did you do?’ And I said, ‘You told me to go, so … ’” 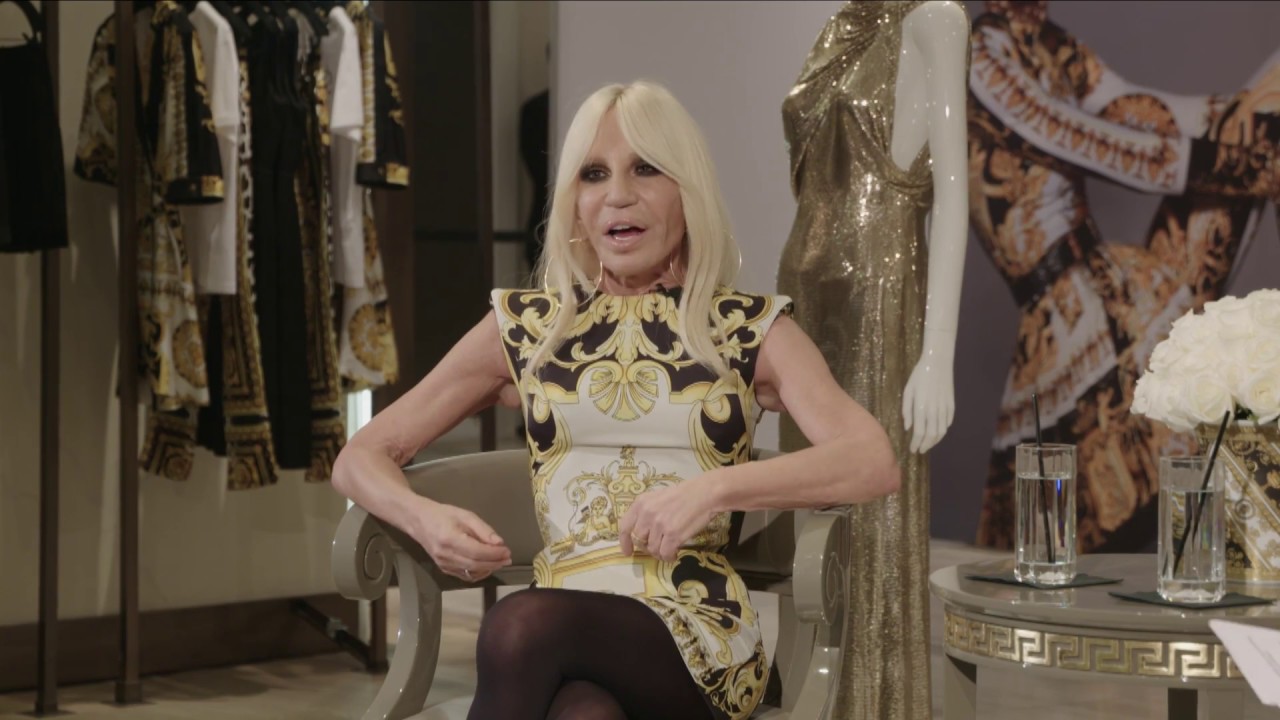 Donatella Versace sat with the director of Instagram fashion associations, Eva Chen, on Saks Fifth Avenue, to relive the now iconic moment that "broke Instagram" when Donatella reunited the supermodels of the 90s, Carla Bruni, Claudia Schiffer, Naomi Campbell, Cindy Crawford and Helena Christensen, on the runway of Spring Summer 2018 of Versace.